In his latest film, "Bullet Train," Brad Pitt plays a hit man who gets involved in a decidedly wild train ride with a happy ending. Which brought us to the question: Is Brad Pitt happy? In an interview with the 58-year-old, it becomes clear which cognitive processes the actor went through - and which principle he followed to find this feeling.
Text Rüdiger Sturm
Photo Sony Pictures

How did you get the idea that movies are the means for your self-realization?
Movies have always been a window to the world for me. As a teenager, I had seen almost nothing of the world save for a bit of the US. Movies showed me different cultures and lifestyles. They were my big love. Still, I never planned on becoming an actor. Where I come from – I’m from Missouri – that wasn’t a career option. Just before college, I realized that a normal job wasn’t for me. I wasn’t ready. And so I thought, why not follow your passion and try to make movies? I broke off my education two weeks before graduation, earned a bit of money so I could afford a trip to California – and drove off.

And you were immediately happy?
It took a while. In the beginning, I didn’t even get appointments for auditions. But at some point, I got my first opportunities and I did everything I could to use them. It took me about ten years to understand what I really wanted. They tried to push me into television, but I remained true to my passion. And that was the movies. The stories told in the cinema – that’s what I wanted. And that remained my goal. 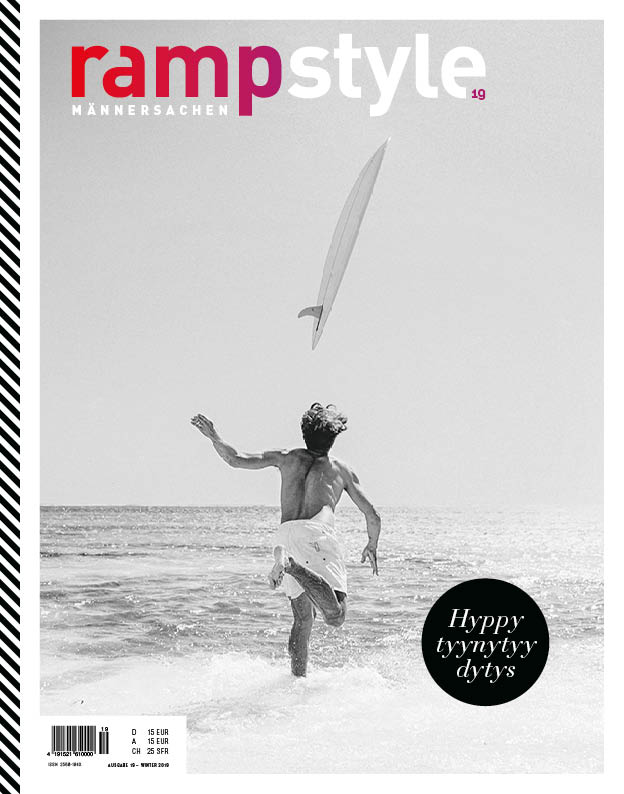 It isn’t easy staying true to one’s principles, is it?
Being a father helped me. I’m very aware that my kids are going to see my films one day. And I think of how movies affected me when I was a kid and the ones that left an indelible mark. I’m more clear about what I want to do. I’m more passionate now.

You said things weren’t so easy in your earlier career. Why?
I was really discombobulated at that time. I just wasn’t prepared for everything that goes with the job. I wanted to be a part of movies and make big movies, but I wasn’t prepared for the intense focus. I really lost my bearings a little bit. There were interviews where I was so nervous the director had to hold my hand to get me through them.

»I wear glasses, because I can’t see in the distance anymore. But I wouldn’t trade my experiences for anything in the world. «

And yet you were a sex symbol. A critic once called you a character actor trapped in a matinee idol’s body.
That’s a very nice compliment. Yeah, I’m a physical actor. But it’s always about the story first, who I am working with, and exploring something new and personal. And of course, I saw the trap that you could easily get pigeonholed. I wanted to mess that up a bit and that’s why I took on eccentric roles like in Twelve Monkeys so that I wouldn’t be typecast.

But that can be risky too. There are lots of actors who played a certain type of role their entire career.
Sure, if I think of someone like Cary Grant, that’s true. But I wouldn’t be any good at that. That just isn’t me. And that’s not risky; that’s smart. I work with directors who are smarter than me; they’re writing the story.

What do you mean with “that’s not me”?
I’m the kind of person who has to keep moving all the time and can’t always do the same thing. When I was a kid in high school, I tried all the sports. I played football, I wrestled one year, I played tennis, I did basketball. I was capable at all of it, but for better or worse I wanted to keep moving. It’s like I’m on a road trip and I forget something. I can’t turn back; I’ve just got to do without my glasses or without my license and risk getting a ticket. Because it drives me mentally. I have some block where I can’t go back.

You wouldn’t want to go back in time and be younger again?
Oh, no. I’m much happier at my age. I wear glasses, because I can’t see in the distance anymore. But I wouldn’t trade my experiences for anything in the world. I like getting older. I’ve become wiser and have learned to take responsibility for others. The time when I would blame my parents for my problems is over. Life is much better that way.

Aren’t you afraid of losing your status to younger actors?
We all have an expiration date. I’m approaching mine. I don’t mind the younger generation stepping up. But there are still a few things I want to do before I kick the bucket. Acting is too much fun for me. It’s like being in a boxing ring. You get hit, but you know there’s a reason for it.

Is there anything you’re really afraid of?
I’m scared of death. But aren’t we all? As a result, I’m more concerned that I’m safe and that my children are safe. I just want to make sure everyone is okay. And it’s certainly changed the way I choose films. I want to do stories where I can make a difference and that my kids can be proud of in the end.

→ read the full interview in rampstyle #19

When the skies open their floodgates, the Formula 1 season is over again, the McLaren 765LT is wearing semislicks and the weather forecaster really has no idea about life, the only thing that helps is to take courage from the performances of the Formula 1 rain masters. A dry spare shirt and a raw potato don't hurt either.
Automotive

AirCar: Above the Clouds

People have been dreaming of flying cars for what feels like an eternity, but nothing has ever really come of it. Countless companies are experimenting with all kinds of aerial vehicles these days, but none of them look very much like cars. With one exception: the AirCar by Štefan Klein.
Creative Space

You Are What You Drive

Repeated research has shown that merely thinking you’ve got athletic prowess can improve your health. So just imagine what could happen behind the wheel of a Range Rover Sport.
Life & Style

On Saturday, December 3, 2022, STARTCOLLECTIONS' pop-up gallery will open for one day in Dorotheenquartier - ramp will be a guest and provide some photos. Read all information about the event here.
View all