Go Have Some Fun!

Play is good for the imagination. It also has the pleasant side effect that you can imagine little things in a big way. And then you’ve absolutely got to have them in big too. If you’re clever enough to find the right allies, that’ll work out swell.
Text Jack Weil
Photo Giles Rozier & Harry Rudd

In the late seventies, the Tamiya Sand Scorcher was the superstar among radio-controlled model cars. In 2010, the Japanese model manufacturer commemorated the 1:10 scale model with the release of a special limited edition. And because a special campaign like that should also draw enough attention, Tamiya topped the offer with an attention-grabbing 1:1 scale version of the release – including remote control.

The life-sized Sand Scorcher was, unfortunately, not for sale. But this left a die-hard fan from Hamburg, let’s just call him “Mister RC”, relatively nonplussed. Without further ado, he rang up the British prototype specialist Dean Lanzante. And you didn’t have to ask him twice. Two years later, the replica was finished. 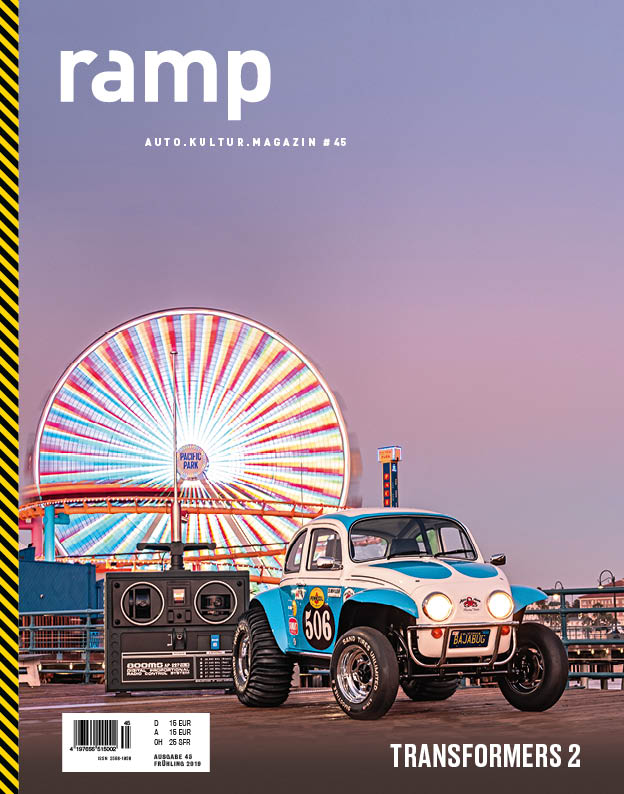 “The hardest part was building a 1:1 scale car in such a way that it looks like a 1:10 scale car,” says Dean Lanzante. He estimates that he and his team had to craft more than 50 percent of the parts themselves, including the hood, the rims and the fenders. But it was worth the effort. At the Goodwood Festival of Speed and the prestigious The Quail, A Motorsports Gathering held during Monterey Car Week, the beach buggy and its oversized radio controller raked in a whole slew of awards including the coveted Spirit of The Quail.

»All I wanna do is have some fun, until the sun comes up over Santa Monica Boulevard.« – Sheryl Crow

The Sand Scorcher is a car that appeals to the emotions and not to reason, says Mister RC. It hails from a time when beach buggies roamed the sand dunes of Southern California. When women wore flowers in their hair and cars had a friendly look about them. Drive the sand beetle through California today and it still fits in perfectly. Look at it, and it says to you, “Don’t take life so seriously. Have some fun.” Though these days, that would look something like this: #fun #happy #lifeisgood.