McQueen at Le Mans: King of Cool meets race car of the century

The 89th edition of the legendary Le Mans 24-hour race is coming up this weekend-where all the performers want to provide a blockbuster on the race track. In 1970, that was even proverbially the case, as Steve McQueen shot his legendary film "Le Mans" starring the Porsche 917. We take a look back-with rarely seen footage.
Text Michael Köckritz
Photo Adriano Cimarosti

To put it right up front: "LeMans," which premiered in 1971, unfortunately didn’t become a box-office hit. Despite impressive images, fast cuts and an extremely lavish production. The plot was a bit too unwieldy for the general public, and there was a general lack of enjoyable and entertaining dialogue. In the first half hour, the actors don't say a word. But that was not the point at all!

In those days, Steve McQueen was not only the best-paid actor in Hollywood, but privately also an extremely successful driver, and of course crazy about racing cars and motorcycles. His enthusiasm for what was then the toughest sports car race in the world was almost instinctive. He simply had to make this film. "LeMans" then became as unwieldy as it was authentic, and is now considered an irresistible testament to racing. A classic. The journalist and author Adriano Cimarosti was present during the filming in 1970. As an extra. As always, he had his camera with him. Fortunately. And not only that. At the time, Cimarosti wrote a comprehensive eyewitness report for the Swiss Automobile Review, which today, like the film, enjoys the status of a classic. His impressions at times were read as much the film is shown today… 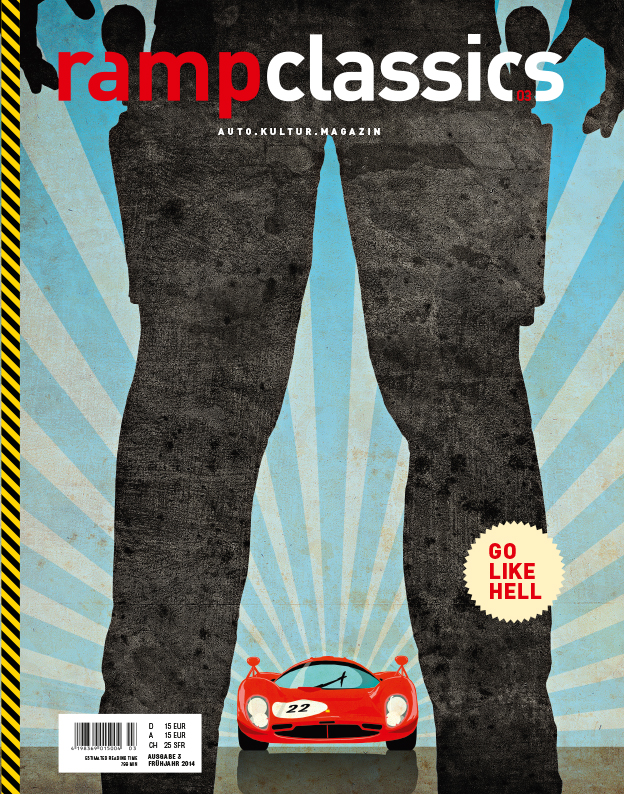 "No fewer than 22 cameras were set up along the Sarthe circuit to capture gripping scenes from the real race on celluloid, so Solar Productions already has 30,000 meters of footage from the race alone."

Unique in Hollywood history: McQueen's film crew took part in the actual 24-hour race itself in a Porsche 908. A Porsche 908 piloted by Jonathan Williams and Herbert Linge. It even made it to the finish line. Far in the back, admittedly.
"A total of three cameras were installed in the nose and also in the rear of the 908, which whirred around the Sarthe circuit at 250- to 300-km/h speeds."

So real speed, real rain, real dirt on the headlights. Additional driving footage was shot afterwards. Here, the film team used a Porsche 917 and - among others - a Ford GT40 as camera cars. McQueen was not allowed to take part in the race himself. That was too risky for the production company. The extra Cimarosti was deeply impressed by the filming. And of the effort McQueen had put in.

“I'm not sure whether I'm an actor who races or a racer who acts.”
-
Steve McQueen

"Each day of shooting at Le Mans is said to have cost between $40,000 and $50,000. The many cameramen were assisted by about 150 specialists. For months Solar Productions rented about thirty real racing cars à la Porsche 917, Ferrari 512S, Porsche 908, Alfa Romeo 33.3, Matra-Simca 650, Chevrolet Corvette, Porsche 911 S, Chevron, Porsche 914 and compensated their owners with a princely rent. The Geneva racing team owner Filipinetti commented: Never before has one of my racing cars brought in so much money. Every two weeks I regularly receive a check from Le Mans.

Incidentally, Joseph "Jo" Siffert proved to be particularly enterprising at the time. Shortly before production began, he bought around a dozen racing cars and rented them out for a profit. Including mechanic and secretary. Since the cars could not simply be driven by actors - except McQueen, of course - racing drivers had to be booked. For Cimarosti, this was a great honor.

McQueen's film crew took part in the actual 24-hour race itself in a Porsche 908.

In the film, we look into the eyes of Siegfried Rauch, who as Erich Stahler shifts gears at full throttle, keeps calmly glancing into the rearview mirror of his Ferrari 512S at top speed, and checks where Steve McQueen alias Michael Delaney is following in the Porsche 917… What about the reality on set? Well…
"Often, however, these famous pilots would stand idle for days, playing Boccia, bored, or courting the female entourage."
And Steve McQueen?

"Once, when he pushed the Porsche 917's engine to 9800 rpm and over-revved it so that the valves blew, he went to the Porsche mechanics, humble and small, and apologized for the mishap."
-
Adriano Cimarosti

Speaking of the Porsche 917. There's this one scene. This memory… Of how Steve McQueen overtakes a 911 in his Porsche 917… How he loses control… How he crashes into the guardrail first on the left, then on the right… How the rear end breaks out, how he bores into the guardrail with his front…. how the car rears up, rolls over… skids across the asphalt… the body shreds as if it was made of cardboard; the engine cover with the number 20 sails like paper… All in slow motion, of course, without sound. Only the impact can be heard as a crashing effect…

"A racing film must contain accidents, whether this suits the supporters or not. For minor accidents, the cars were piloted by stuntmen; for dangerous things, special effects specialists were called in to slam the race cars into the barriers at the desired point by remote control."
And the 917?

"In order not to have to destroy real Ferraris or Porsches, they preferred to sacrifice an older Camaro-engined Lola T-70 chassis, but clad in either Porsche 917 or Ferrari 512-S bodywork (…. ) The Lola Porsche shot into the guardrails in first gear (operating the transmission or installing an automatic would have been too complicat-ed) at 6000 rpm or 130 km/h on a long curve and bounced several more times before coming to rest. "

But there were also real accidents on the set. The English racing driver David Piper went off the track in a Por-sche 917, crashed and was taken to the hospital, where one of his legs had to be removed.
This victim is mentioned in the credits.

One question remains: Why didn't Cimarosti make a career in film?