The King of Cool and his tool

How to stay sane during crazy times? Keep cool! To prove our point, a quick fast-paced trip back to the sixties and seventies. We even found the right time machine for the job. Possible risks and side effects? California Dreamin’!
Text Michael Köckritz
Photo Benjamin Tafel

USA, 1968: “It was the best of times, it was the worst of times . . .”
America bombs Vietnam, Robert Kennedy and Martin Luther King Jr. are assassinated. The musical Hair and Stanley Kubrick’s 2001: A Space Odyssey have their premieres. The Beatles launch Apple Records and Jimi Hendrix releases Electric Ladyland. A boy named Will Smith is born in Philadelphia and Jackie Kennedy marries Aristotle Onassis. Semiconductor giant Intel is founded, and the Prague Spring is brutally suppressed. In San Francisco’s Haight-Ashbury district, the Summer of Love is in full swing, culminating a year later at Max Yasgur’s farm in Woodstock, when 400,000 hippies and music fans celebrate the biggest and most chaotic rock orgy ever with love-ins in the mud as Richie Havens sings “Freedom” on stage. And: Steve McQueen, undisputed “King of Cool” of the sixties, seventies, eighties, nineties – of all time – races a dune buggy across the sands of Crane Beach in Massachusetts with Faye Dunaway in the film The Thomas Crown Affair.

“I love that film,” Mohamed El Khnati had beamed when we visited him, eight years ago now. Mohamed, who most people just call Momo, was living in Belgium at the time, and his dark eyes sparkled as if he were a child about to have his greatest wish granted on Christmas Eve. “And I just love that buggy!” 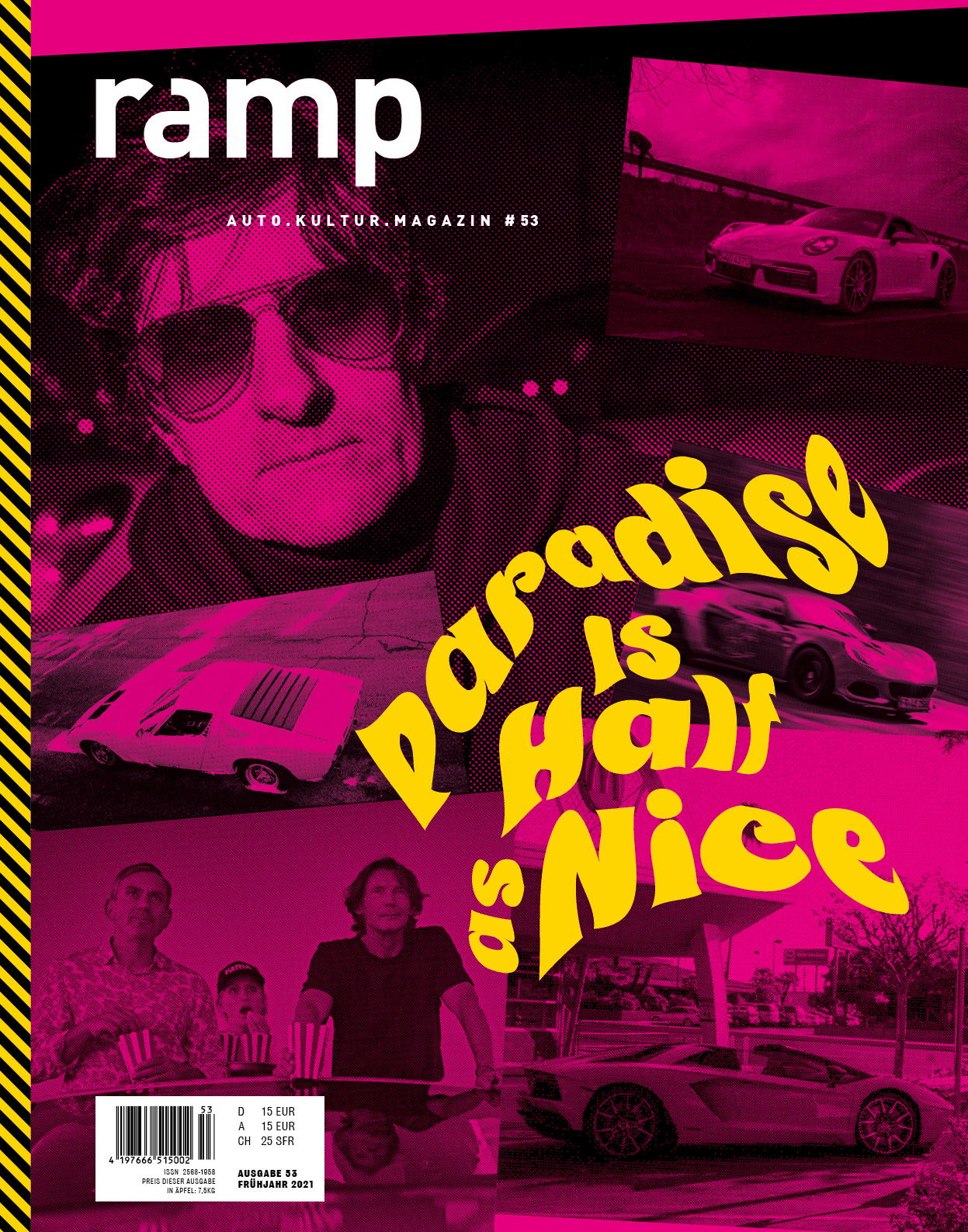 "I just love that buggy!”

To be honest, Momo loved – and presumably still loves – just about anything that even remotely has to do with Steve McQueen, ever since he first saw Bullitt and Le Mans as a young boy, as he told us. And who can blame him? He had competed in races himself, owned a stable full of classics, including the original Triumph from The Great Escape. But Momo was especially fond of The Thomas Crown Affair, and he had got it into his head that he wanted a car like that too – a dune buggy that could give him the sort of feeling of freedom you find in minimalism, an unbridled lust for life on four wheels, nothing more than an engine and two seats, sun and sand in his face, wind in his hair and flies in his teeth. And like Woodstock for America’s youth, the end of the sixties was a turning point in McQueen’s career as well. While his hit The Great Escape just five years earlier had been a reckoning with the restrictions and conventions of the early sixties, Thomas Crown was a stylish embrace of the new freedoms, with the desire to break all the rules. The Hollywood star had already slipped into the roles of The Cincinnati Kid and Nevada Smith, Bullitt was already cult when Crown hit theaters – and McQueen was in the wonderful position of being able to choose his roles according to his fancy. Just like his wheels.

McQueen had Thomas Crown’s dune buggy built exactly to his specifications and insisted on working with the mechanics to turn the bolts and drive the thing himself for the shoot. “I helped them design it, so I’m kinda proud of that,” McQueen would later remark in an interview. “It’s set on a Volkswagen chassis with big ol’ wide weenies, big wide tires on mag wheels, Corvair engine stuffed in the back . . . It’s very light, you know. It’s pulling about 230 horses, and the vehicle weighs about 1,000 pounds.”

Who wouldn’t want something like that in their private collection? It certainly was easy to sympathize with Momo, but our friend had a few problems to deal with before he could park the famous dune buggy in his garage. “Doing my research, I found out that there was only one of this buggy,” Momo says, “the one that Steve McQueen developed and designed for the movie.” After filming, the buggy went to a buyer in Hawaii, who foolishly rebuilt it into the original Meyers Manx version. And that was the end of the dream. For the moment.

“There were no other copies. Nothing. The shop that made the buggy for McQueen in Burbank had burned down, and all the parts, all the drawings, all the designs were destroyed.” Damn, damn, double damn!

What Momo didn’t know at the time: Steve McQueen’s original dune buggy would be lavishly restored only a few years later. And just last March, it was auctioned off at Bonhams. Where it fetched a whopping $465,000! Perhaps it wouldn’t have made any difference to Momo anyway. But whatever the case, the former cameraman and Porsche mechanic decided to simply fulfill his dream by building one himself.

It was a lot of work, and at one point I found that I couldn’t register the car because I didn’t have a licensed brand.” So Momo formed his own company in the UK (“In the UK there’s this thing called low-volume manufacturing.”), called it Solar Crown – made up of the name of McQueen’s former production company, Solar Productions, and “Thomas Crown” – and set about producing the famous dune buggy, somewhat unemotionally titled TC300, on a small scale.

The result was – in a word – stunning. Okay, so McQueen’s little wind deflector ended up being a semi-permanent windshield in Momo’s buggy, the instrument panel could just about pass for spartan, the seats were rudimentary but effective, the hub lock on the massive rims alone was worth the price, and even the technology was more modern, but otherwise I could imagine it was Steve McQueen sitting behind the wheel thundering through the outskirts of Brussels with me. It didn’t get any simpler. Granted, we weren’t racing across the beaches of Massachusetts, instead driving (relatively) well-behaved on the austere asphalt of a residential suburb headed into Brussels. There weren’t any flies either, but I found that to be less of a problem. When I closed my eyes, however, for a brief moment I expected Faye Dunaway’s hand to touch my knee. Momo’s TC300 was like a dream, a reduction to necessities, the product of a delightfully nostalgic imagination. There was nothing there to interfere with the fiction. The sound was brutal, the gear stick vibrated in a way that could almost be called obscene, the fantasy was nearly perfect. The fun definitely was.

So Momo formed his own company in the UK, called it Solar Crown – made up of the name of McQueen’s former production company, Solar Productions, and “Thomas Crown” – and set about producing the famous dune buggy, somewhat unemotionally titled TC300, on a small scale.

God, how beautiful impractical things can be! I felt like Alice falling down the rabbit hole into Wonderland. Except that I hoped the fall would never end. Everything was so real, so genuine. Momo’s car was a veritable time machine, one that instantly recalled memories and spontaneously accelerated me into an era when life was seemingly simple and moments of happiness were allowed to drift boisterously on the stream of time. But it also took my breath away. I don’t think that back in the sixties the buggy would have hit me so hard when the right foot came down, nor would I have been so intimated by the lack of other cars at the traffic circle. It certainly wouldn’t have shaken me so mercilessly that I was almost glad when the light turned red. Getting in and out of the car would probably have been a bit easier too when I wasn’t yet forty, and a short trip to the supermarket would have been better done in another car anyway.

And suddenly I realized that nothing had really changed. The squares still shook their heads, reminding me that we’d better not park this car in a no-parking zone, and perhaps I shouldn’t leave my phone in the glove box (yes, there was one). The girls still smiled when we drove by. The Pakistani rappers next to us at the traffic light morphed back into awkward teens, mouths agape with their lower jaws hanging slack at half-mast.

And then we floored it.

Though honestly, the acceleration wasn’t all that important, whether we had a red-light challenger or not. All that mattered was that my memory was going full throttle. I longed for a beach, any beach. Brussels and its suburbs might have their charm, but this thing didn’t belong in the city. What we needed was some beautiful scenery, the smell of the sea, and sand shooting out of the back in epic fountains. Like Steve McQueen, I could have transformed a dune into a banked turn, left hand on the wheel, right hand on Faye Dunaway’s shoulder. Cool. Endless summer feeling!

And Faye would have been smiling – while racing across the sand, of course, and not just afterwards as I somehow try to extract myself from the car.

→ Read this feature and many more stories in the upcoming ramp #53, which will be published on March 26th.

A heads-up on International Mud Day: it's going to get dirty. Very dirty. And Daniele Calonaci from Jeep shows what it means when a designer takes the ramp carwash literally.
Automotive

What you are about to read may leave you feeling disturbed. It might shake your view of the world and you may need to seek professional help as a result. Your choice.
View all